Fairport Harbor was first named Grandon. The land was part of the Connecticut Western Reserve and belonged to the Connecticut Land Company. They sent a group of surveyors here in 1796 and 1797, and the land was sold to men mainly from New England.

The earliest archeological evidence of people living in what is now called Fairport Harbor points to the Erie Indians, sometimes called the Cat Indians, from early in the seventeenth century to about 1650-1654 when Erie villages were destroyed by the Iroquois.

The first recorded visit by white men appears to be that of Major Robert Rogers and his Rangers who were driven by a storm into the shelter of what is believed to have been the Grand River during an expedition to Detroit in 1760.

Trappers, traders, surveyors and others may have lived here before 1800 but it cannot be ascertained who settled here first. In the History of Geauga and Lake Counties, Ohio, published in 1878, there is reference to pioneer families travelling through in 1798. “They landed at the mouth of Grand River, on whose banks no tree had been cut, or cabin or tent of civilized man erected. Here a frail cabin of bark was constructed, to shelter the women and children and store the goods. . . . the men blazed a road to Burton, underbrushed it on their return, and made it passable . . . “ and constructed sleds to transport their families to the interior settlements. 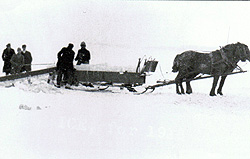 On May 16, 1812, the town of Grandon was laid out by Captain Abraham Skinner, Samuel Huntington, and a few others, on land deeded to Samuel Fowler in 1798 by the Connecticut Land Co. The location at the mouth of the Grand River helped to create a thriving port and village. In 1836 the town of Grandon was incorporated and the name was changed to Fairport. The word “Harbor” was added in 1823.

The first lighthouse and keeper’s dwelling were built in 1825 by the famous architect Jonathan Goldsmith. A new lighthouse, a combination light and foghorn station, was completed on the west breakwater in 1925. It has been completely automated since 1948, so the U.S. Coast Guard no longer needs to stay in the lighthouse quarters.

In 1831, the harbor became the first federally sponsored port facility on Lake Erie. Shipbuilding, fishing and transportation of goods helped to create a prosperous port. Exports in1847 were valued at $462,000 and imports, $529,000.

Most of Fairport Harbor’s first residents were of English and Irish descent, but when the ore docks were built, many Finnish, Hungarian and Slovak people immigrated here. Churches, organizations and culture in Fairport today still reflect this ethnic mix.

When the ore docks were established, ship traffic increased considerably as the large freighters brought in loads of iron ore from the iron ore mines in Michigan and Minnesota. From the Fairport docks the ore was transported to Youngstown, Ohio, Pittsburgh, Pennsylvania and other steel mills in the area. 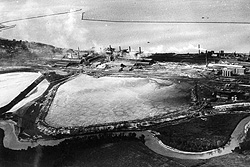 The docks were the main employers in town until The Diamond Alkali Company, established in Fairport in 1912, began producing soda ash, caustic soda and bicarbonate of soda. The plant employed several thousand people from Fairport and the surrounding communities. Fairport schools benefited from their taxes. Diamond Alkali merged in 1967 with the Shamrock Oil and gas Corp. to become the Diamond Shamrock Corp. When “The Diamond,” as local residents called it, closed on December 31, 1976, due to obsolescence, Fairport residents found it necessary to pass a 20-mill levy to keep funding their schools. 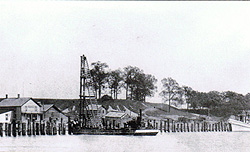 All of the railroad tracks in the switchyard between the Grand River and High Street were removed in the early 1980s. The land sat vacant until the early 1990s when the area began to be redeveloped into recreational boating marinas and housing developments.

The harbor still maintains limited commercial traffic. Sand and limestone are major products shipped through the port. Rock salt is a major export from the port. 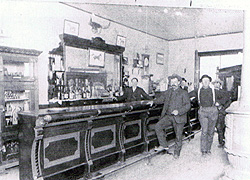 Today Fairport is largely a commuter community. The Diamond Shamrock headquarters building has been converted into fine apartments, while condominiums overlooking the lake were developed on the former corporate property. Hemisphere Corporation is redeveloping the brownfields of the former Diamond Shamrock property, shared by Fairport Harbor, Painesville Township and the City of Painesville, into a world-class sports resort for Cleveland-based IMG. The resort, Lakeview Bluffs, will take advantage of long-vacant property overlooking Lake Erie. 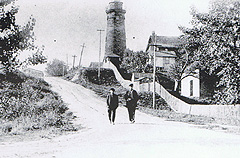